FAQ: Is Eating Late Bad For You? 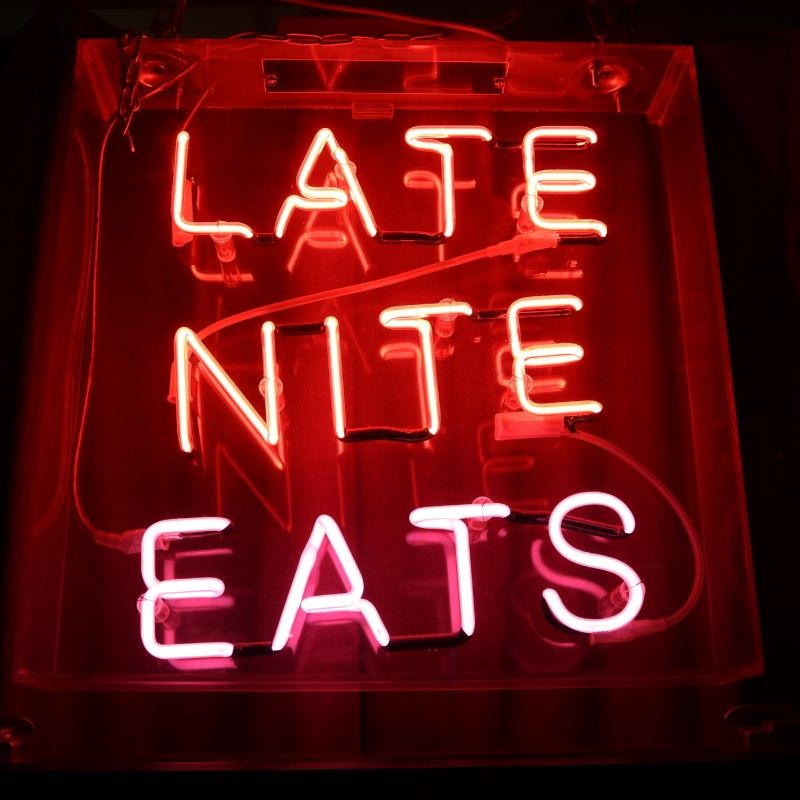 Have you ever heard the rule “You’re not allowed to eat after (insert arbitrary time here)?”

If so, you’re not alone. Somewhere along the line the media has sent out messages that have shunned the idea of eating late and have blamed it for a number of health issues, including weight gain. I get this question all the time and understand the confusion! So I want to help set the record straight on it and explain how timing of eating impacts our health. Keep reading for answers!

Will eating late cause weight gain?

Weight gain seems to be the most common fear I hear about eating late. It is a common belief that calories eaten later in the day are more likely to be stored as fat, thus leading to weight gain. Yet the honest truth is that calories don’t count more at night than they do during the day. There is no physiological clock that turns on or off in your body that tells it to start storing more fat after a certain hour of the day. Your body can and will burn calories at 10am just like it can at 7pm!

What has a larger impact on weight is what you eat throughout the entire day (and how active you are), and not just about what you do in the evening.

Did you know that some of the healthiest countries in the world eat very late in the evening? The average dinner time for Americans is between 6-7pm, with many eating even sooner. Compare this to countries like France, Italy, and Spain, where dinner times can more commonly occur between about 8-10pm. Yet these countries are all in the top 25 healthiest nations, while the US is currently ranked #35. So clearly, it’s not just about the time on the clock.

But is eating late good for me?

Just because eating later in the day doesn’t necessarily lead to weight gain doesn’t mean it is a habit you should adopt, especially if you aren’t already used to doing so. This is because eating too close to bedtime can interfere with some normal bodily processes, such as the following:

To help avoid these symptoms, it is best to try to wait at least 2-3 hours between your last full meal and bedtime. If that’s not always possible, try at least an hour and make it a smaller meal that doesn’t require as much work to digest. If you’re wondering about snacks, know that having a small snack closer to bedtime isn’t as likely to cause issues, and can be appropriate and even recommended for some people.

Tips for timing of meals, and how to best manage late night eating

While there is no “perfect schedule” when it comes to the timing of eating, it is always best to try to spread out your meals throughout the day, rather than consuming a majority of calories in the evening. This may look like eating every 4-5 hours on average, and may help to better regulate appetite and caloric intake throughout the day.

Also, try making dinner a smaller meal, with breakfast and lunch accounting for a larger portion of your calorie and nutrient intake. This can support your body in promoting better digestion, sleep, and overall health. If you need a snack after dinner, remember that this is fine, just try not to become overly full as a result of it.

Finally, pay extra close attention to the composition of your meals throughout the day, especially in the evening. This means making sure your meals are balanced with carbs, protein, and fat instead of primarily being carb-heavy, for example. This, too, will help with everything from metabolism to blood sugar balance to sleep quality and even your mood when you wake up the next morning.

It’s not just about weight gain. What matters most is eating more of what you need during the daytime to help support restful sleep and overall health. If you find yourself frequently eating late at night, try to evaluate what your eating habits were like earlier that day and see where some adjustments can be made. There are many reasons why late night eating may occur, so the goal is never to be perfect, but to focus on the big picture of your eating habits.

⭐ FOODS THAT MAY SOOTHE REFLUX ⭐️ We find t

✨ Here are some of my less traditional tips to s

⭐ A DAY OF ANTI-INFLAMMATORY EATING ⭐ This d

⭐ FOODS THAT MAY SOOTHE REFLUX ⭐️ We find t

✨ Here are some of my less traditional tips to s

⭐ A DAY OF ANTI-INFLAMMATORY EATING ⭐ This d